Last night I discovered that Beyblade has an official YouTube channel, and the entire first series (51 episodes) is there. So I guess I know what I’m doing for the next few weeks.

It’s just started to rain where I live (England), so I’ve decided to go sit outside. Because it’s finally a temperature that my body can live with.

Apparently even a minor design change such as this simple tiling background can make a website look much better.

I’ve finally finished my first roll of film with my Dubblefilm SHOW camera. Nothing special, just a 36 exposure roll of Kodak UltraMax 400. But I’m very interested to see what comes from this camera, as I’ve taken photos in all kinds of locations and lighting conditions. 📸 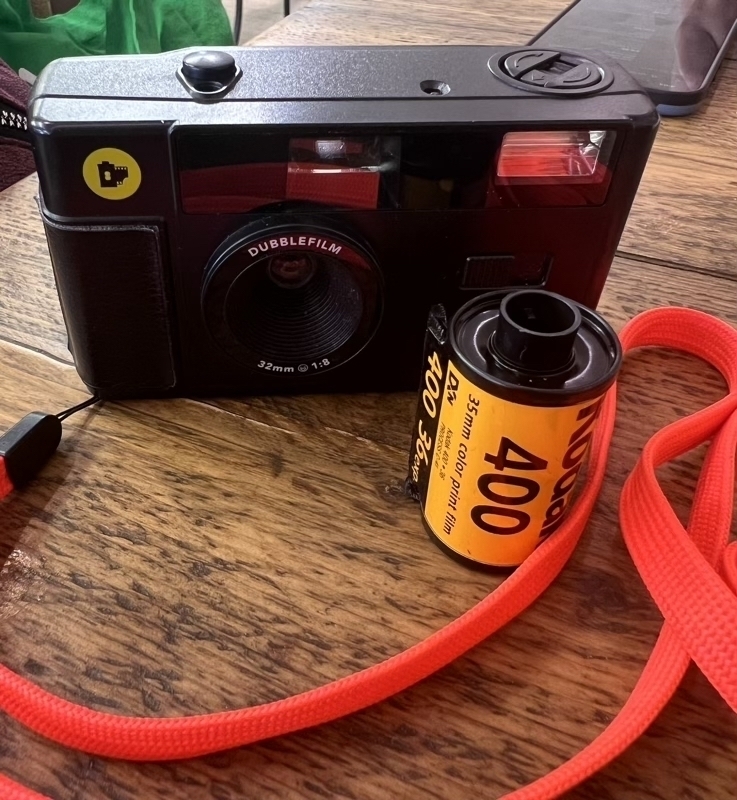 Quick update on my search to find a web archive tool: I’ve found ArchiveBox, which is self-hosted solution that allows you to build your own web archive. For now I have it archiving locally on my Mac, but I think I’ll eventually look at running it elsewhere, or adding syncing.

I’m away this weekend, in Wells-next-the-sea, and although I have my MacBook with me, my only source of internet is a temperamental 4G connection via my phone. It’s made me realise (or maybe remember) the pieces of software that I use which absolutely require an internet connection.

So I think I will be going through them, and making a couple changes. Since, although in most cases you can rely on having a connection. It still feels weird to me that my task manager (Todoist), doesn’t want to work unless I have internet access.

One more problem that I’d like to solve is saving websites to read later. Not via RSS feeds, I have Reeder for that, but I would ideally like a way to save a link from my browser, and then have that page archived locally to my device. I think Feedbin (the RSS service I use) and Reeder both have mechanisms of saving one-off pages for reading later. However, one thing I don’t like about RSS feeds is that by it’s nature, it’s only the raw article contents. Whereas I like to enjoy writing within the context of the website where it was published.

Maybe that’s weird, but I think sometimes extracting the article contents from a website can cause it to lose a bit of personality.

Anyway, that’s enough complaining. I’ve now got to work out how possible this actually is.

I watched a great episode of the Rich Roll podcast with neuroscientist Dr. Andrew Huberman. There was a lot that fascinated me, so I decided to write about the three I found most interesting.

Yet again, I’ve created another Micro.blog theme. This time however, it’s one for myself. It’s still subject to change as usual, but I’ve gone with a Web 1.0 inspired design, and I think it looks pretty cool!

I really ought to start doing bit more research on cryptocurrencies.

From what I’ve heard, the popular currencies seem to have massive transaction fees and are also very bad for the environment. For those reasons, and because of the volatility, i’ve never really looked into it.

However, I am very interested in the concept of a cryptocurrency.

Although that might just be the idea of a universal digital currency.

I like the idea of a digital currency that is (mostly) anonymous, and allows more people to have better financial agency. In that you just need a “wallet” to receive and send funds, instead of signing up or a bank account.

I can’t say I’m particularly bothered by the part of cryptocurrency that’s all about mining, algorithms, massive power usage, etc. But if that’s required, then I’ll go along with it.

But I don’t think a cryptocurrency will ever be someones primary currency unless it has solutions to the three problems I mentioned earlier: power usage, transaction fees, and volatility.

Maybe one like that already exists. I guess I’ll find out when I actually look into the current state of cryptocurrencies.

Don’t expect me to go all “crypto bro” though.

Currently thinking a lot about Twitter, and how it can be used to share fleeting ideas and opinions, but also for some as a permanent record of thoughts. 🤔

The main question I’m asking myself is “should tweets really last forever?”.

I’ve spent nearly a week with a Pixel 6 as my main phone, and the only things I’m really missing from my iPhone are iMessage, AirPlay (HomePods), AirDrop, and also the camera system of the iPhone 13.

The first three are obvious features designed to lock you into an ecosystem. But as for the cameras, the iPhone feels a little more reliable and faster for me. Maybe it’s because I’m comparing the iPhone 13 Pro to a Pixel 6 (not Pro).

The colours also tend to be a bit more vibrant from the Pixel camera, sometimes even making photos look over processed. I’m sure most of it is just because I’m used to the “iPhone” style though.

It’s not all bad though, here are some of the things I prefer on the Pixel:

There’s probably a lot more that I’ve already become used to. So while there are things I miss from the iPhone, there’s quite a lot that I’m enjoying on the Pixel.

I hope Apple start to experiment with different phone form factors soon. Otherwise I think i might end up making the switch to Android, just I can experience something different for once.

I’m thinking I might have to buy the game myself, but it seems quite complex, so I don’t know if I actually prefer watching someone else play ir, rather than learning myself how it all works.

It’s called Scribe, and it’s my attempt at taking one of my earlier themes, Fortis, as a base. And making it loot a bit more contemporary, with a nice serif font, warm colours, but still maintaining a very readable and clear layout.

It’s all on GitHub, so feel free to use it on your own blog, and if you want to take it a step further, you could always use this theme as a starter and make your own customisations. 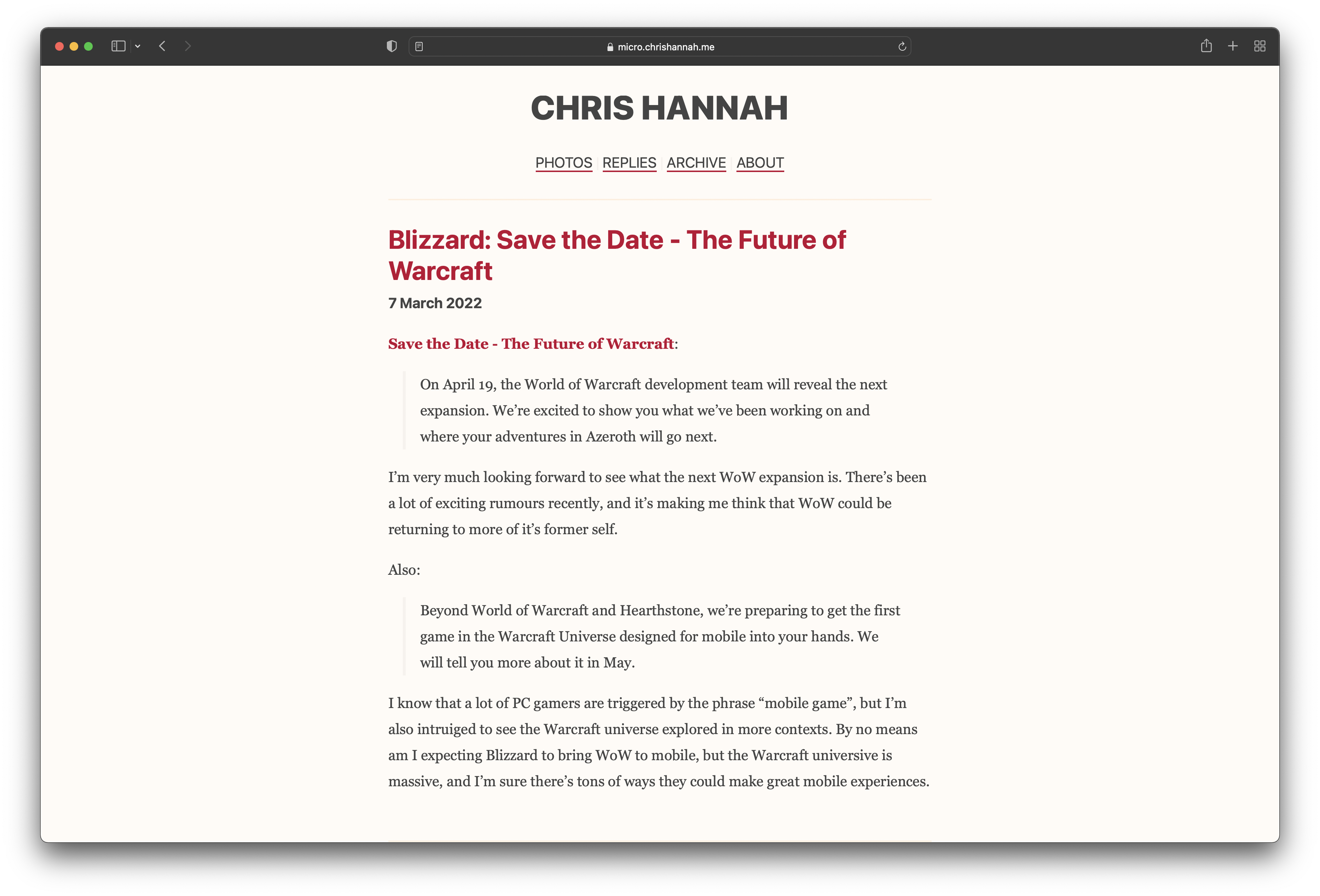 I’m thinking a bit about email at the moment. On one hand, I love the format, it is the closest digital representation to sending a letter. On the other hand, it would be much better if only people could send emails.

Every now and then when I’m using my iPad, I remember that I can detach it from the Magic Keyboard. When I do, it feels like a whole new device. And yet, once it’s connected back to the keyboard, I forget about it and the same thing happens about a week later.

After using a few different fonts on my blogs, I’ve decided to switch to web-safe fonts. For sans-serif the priority is the apple system font or “Helvetica Neue”, falling back to sans-serif. And for serif, I’ve gone with “Georgia”, “Garamond”, and then falling back to serif.

It means extra fonts no longer need to be fetched when visiting my blog, and I also think it looks a bit better anyway.

This change has taken place on my main blog, and also on my micro blog which uses my in-development theme, Scribe1. 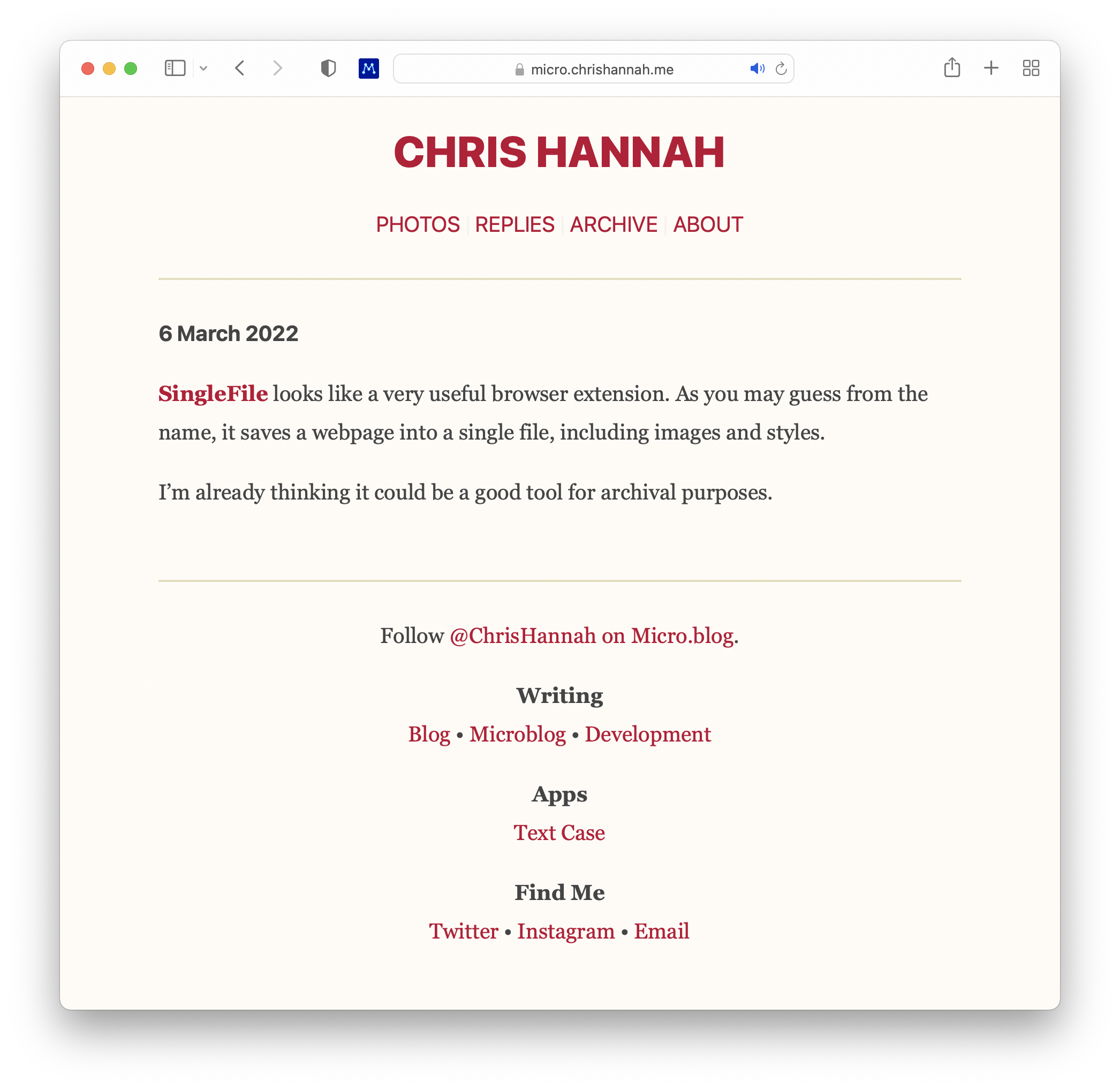 Childhood and nostalgia aside, I think my favourite film might be The Secret Life of Walter Mitty. The soundtrack is great too.

It’s still early on, but here’s what my latest Micro.blog theme, Scribe, currently looks like.

All I’ve done so far is to take my Fortis theme, and then changed the fonts and style to match my blog. there may be layout changes, but probably minimal. 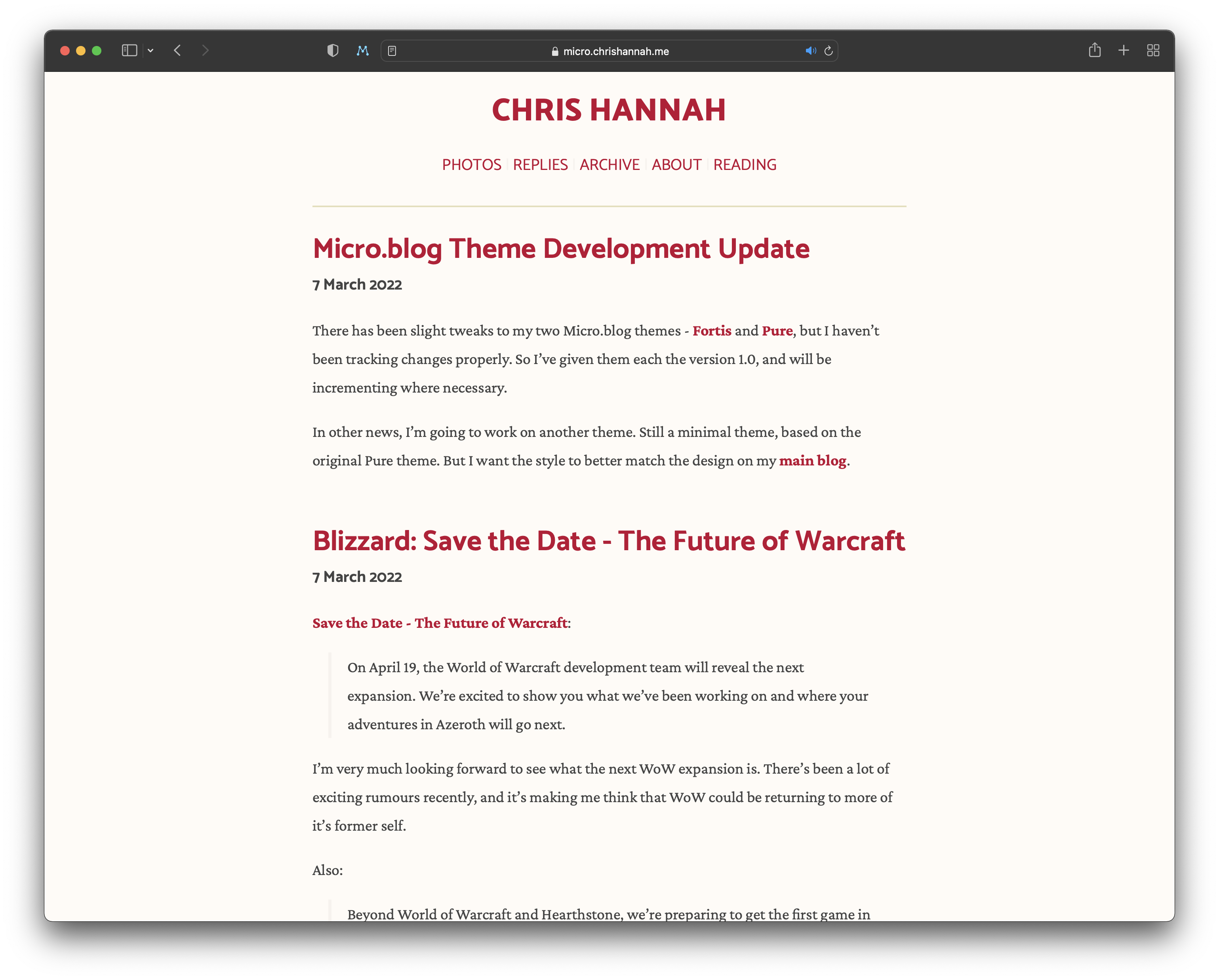 There has been slight tweaks to my two Micro.blog themes - Fortis and Pure, but I haven’t been tracking changes properly. So I’ve given them each the version 1.0, and will be incrementing where necessary.

In other news, I’m going to work on another theme. Still a minimal theme, based on the original Pure theme. But I want the style to better match the design on my main blog.

Save the Date - The Future of Warcraft:

On April 19, the World of Warcraft development team will reveal the next expansion. We’re excited to show you what we’ve been working on and where your adventures in Azeroth will go next.

I’m very much looking forward to see what the next WoW expansion is. There’s been a lot of exciting rumours recently, and it’s making me think that WoW could be returning to more of it’s former self.

Beyond World of Warcraft and Hearthstone, we’re preparing to get the first game in the Warcraft Universe designed for mobile into your hands. We will tell you more about it in May.

I know that a lot of PC gamers are triggered by the phrase “mobile game”, but I’m also intruiged to see the Warcraft universe explored in more contexts. By no means am I expecting Blizzard to bring WoW to mobile, but the Warcraft universive is massive, and I’m sure there’s tons of ways they could make great mobile experiences.

SingleFile looks like a very useful browser extension. As you may guess from the name, it saves a webpage into a single file, including images and styles.

I’m already thinking it could be a good tool for archival purposes.

I switched my site to use a serif font for the body text, and I think it gives it a whole new feel.

This may sound odd, but I think the design now matches the style of writing that I want to focus on. Maybe I’m being pedantic. But when I see that I’ve hit my daily reading goal, my first response is not to share it or to adjust the goal.

Why can’t there be a prominent button that lets me just acknowledge it and move on. Not a small cross in an awkward position of the screen.

One problem that tends to crop up every now and then for me is how I separate my online writing.

Right now I have a main blog, a micro blog, and a dev blog.

My micro blog is more for life updates and more meta commentary, the dev blog has been used for updates on my personal projects. But the main blog has always been where the confusion comes from.

The ideal separation I have in mind right now is this:

I think for this to happen, I’d need to do three things:

I guess the tricky bit will be actually doing all of this. Maybe the best way is to export my entire blog, organise it locally, and import?