One thing that has really improved my productivity recently is ambient music. And to be more specific, Harry Potter ambient music.

I wrote about ASMR Rooms and using them to immerse yourself into a single task, and on “background environments” in general, back in November last year. And it’s something I’ve slowly been using more over time.

I’m not totally sure why Harry Potter is the thing that works for me, but I assume it’s down to a few factors. It has a nostalgic effect, the music is great, and I find it to be rather relaxing. The full effect comes with the various videos you’ll find on YouTube where you’ll get a scene from the movie (or an adaptation), a mix of the music, some slight movement in the scene, and also a few atmospheric sound effects.

The best way to describe it would be that you’re immersing yourself in a distraction-free environment, where you can fully focus on a single task. What I typically do is connect my MacBook to my external monitor, and keep the MacBook screen solely for one of these videos. It seems to keep one half of my brain occupied, so I can use the other half to do something productive.

It’s something I would suggest that everyone tries, although you may find that Harry Potter isn’t right for you. I’d suggest searching “ambient music” or “ASMR room” on YouTube, and having a look through them. I’ve also found some great ones based on The Hobbit which are quite nice too.

There were no suitable unicode symbols I could find to represent external links, so I’m using one from font awesome that I think does an acceptable job at indicating that the title link is to an external source.

I’ve been adding support for shorter link-posts on my blog. What do people think about the format and design I went with? 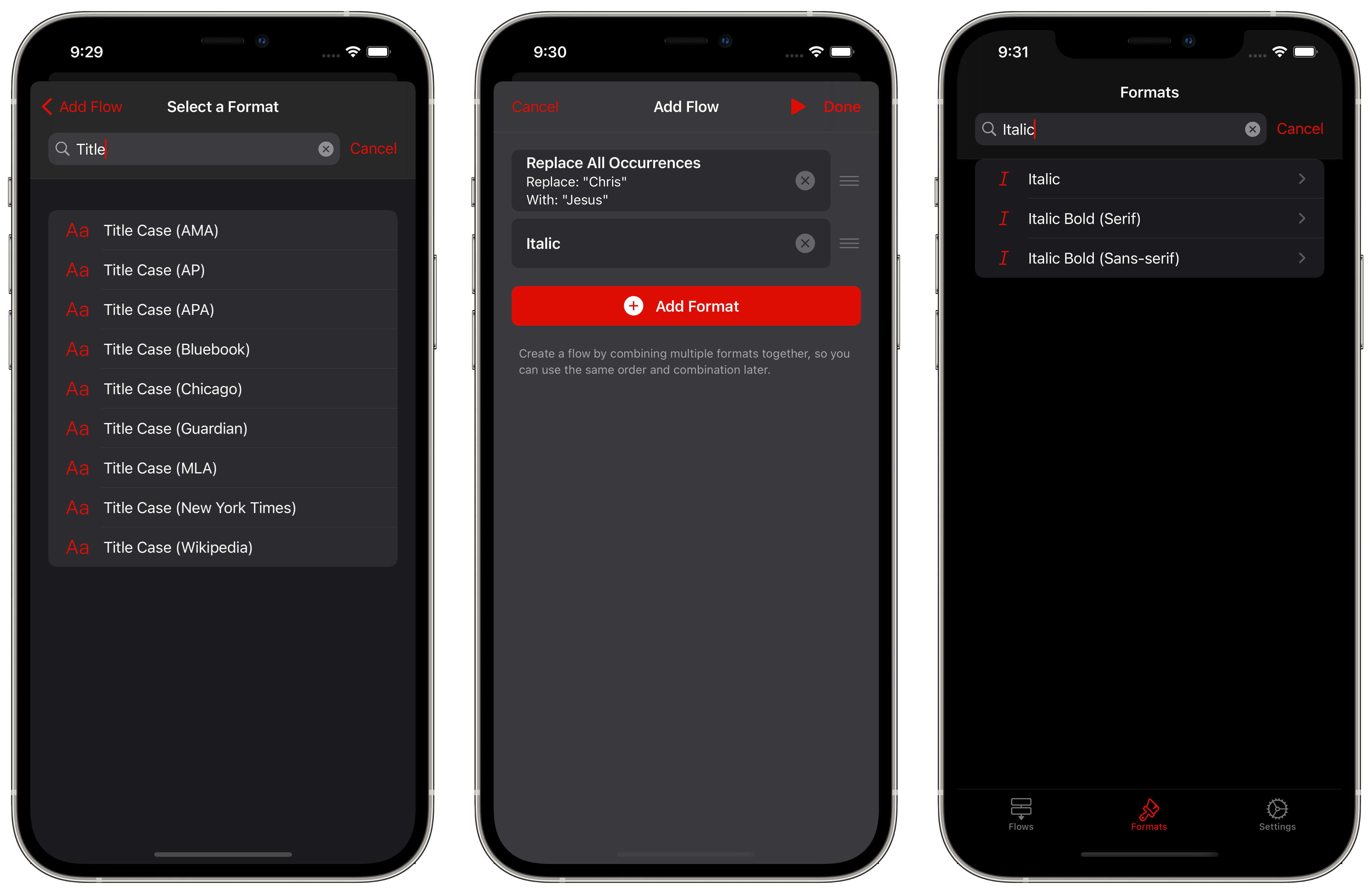 After the hype of the finale, I decided that I would finally give WandaVision a go. I had seen some early clips and decided it wasn’t for me, but I had nothing to do today so I thought I’d binge the whole series in one go.

Without including spoilers, here are my overall thoughts of each episode:

Here were my thoughts after 7 episodes:

But episode 8 was when it really kicked into gear. That’s when I started to find it really interesting, and I was actually gripped for once. And episode 9 was absolutely incredible. These two episodes made up for everything I found boring in the first 7.

I’m actually now excited to see where the storyline continues.

I just submitted an update to Text Case, and it took just 7 minutes for the macOS version to enter review. 🤯

After seeing some of the hype for the WandaVision finale, I decided that I’d give it a go. But I must say, that first episode dragged so much!

Another thing, how is there 7 minutes of credits?! There was only 22 minutes of actual content.

This may be taking it slightly too far, but along with refactoring the way title case formats work in Text Case (more rule-based and therefore much clearer to define), I also added four new standards. Which means there will be 9 total title case formats.

The March Blogging Challenge has begun and today’s topic is “Routine”.

Join the Discord to connect with other bloggers, and to see topics for the next week: bloggingclub.link

It’s not exactly a world class photo, but I keep looking back at this one I took yesterday. The curves in the wood seem to make it feel a bit trippy, like the whole photo is being twisted. 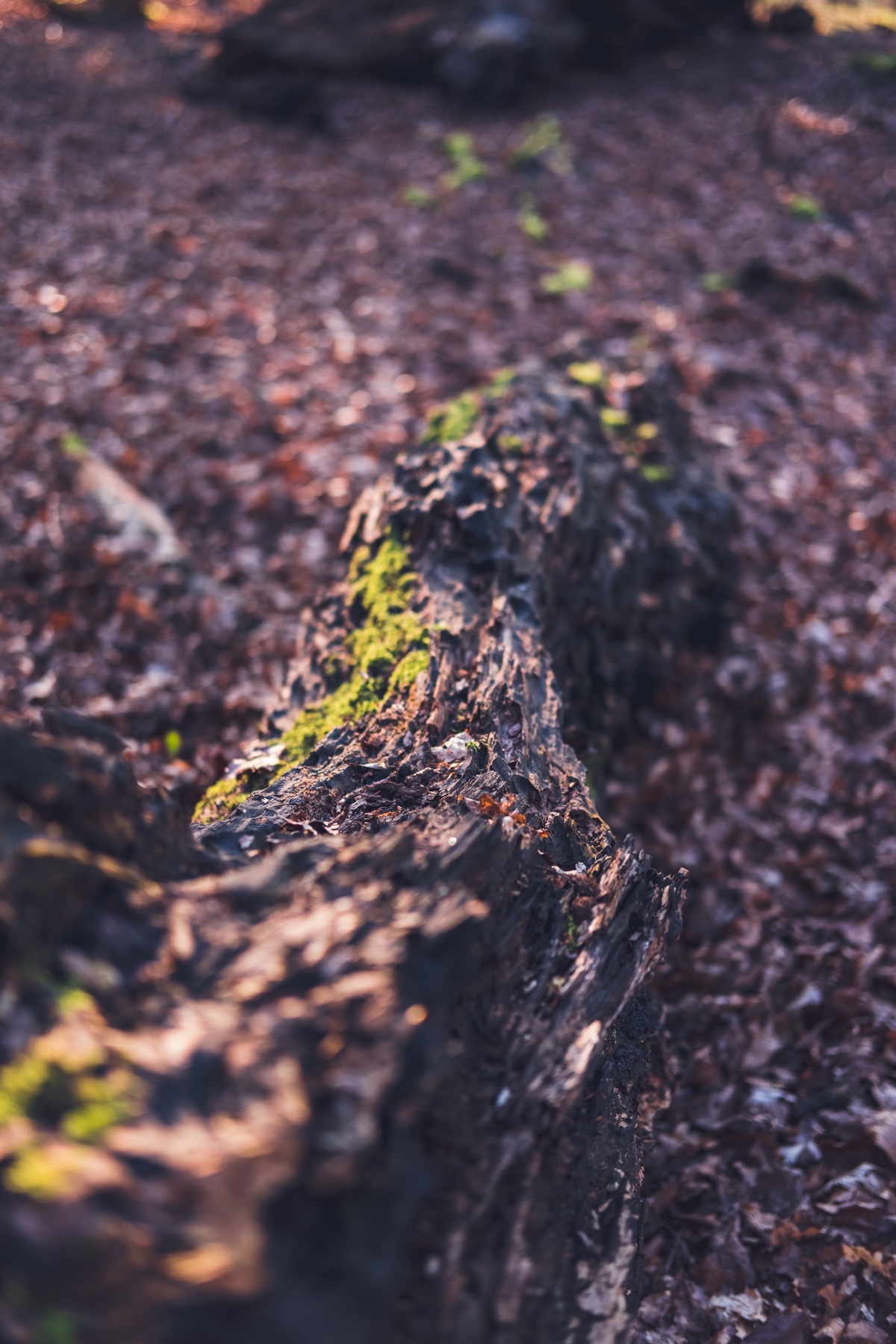 The 25 years of Pokémon celebrations make me want to watch the anime series from scratch again. It’s already well over the 1000 episode mark, but it would be pretty fun! 👀

I didn’t think that at 28 years old I would have just watched a virtual concert with Post Malone, celebrating 25 years of Pokemon. My younger self would be proud.

The visuals were pretty incredible. 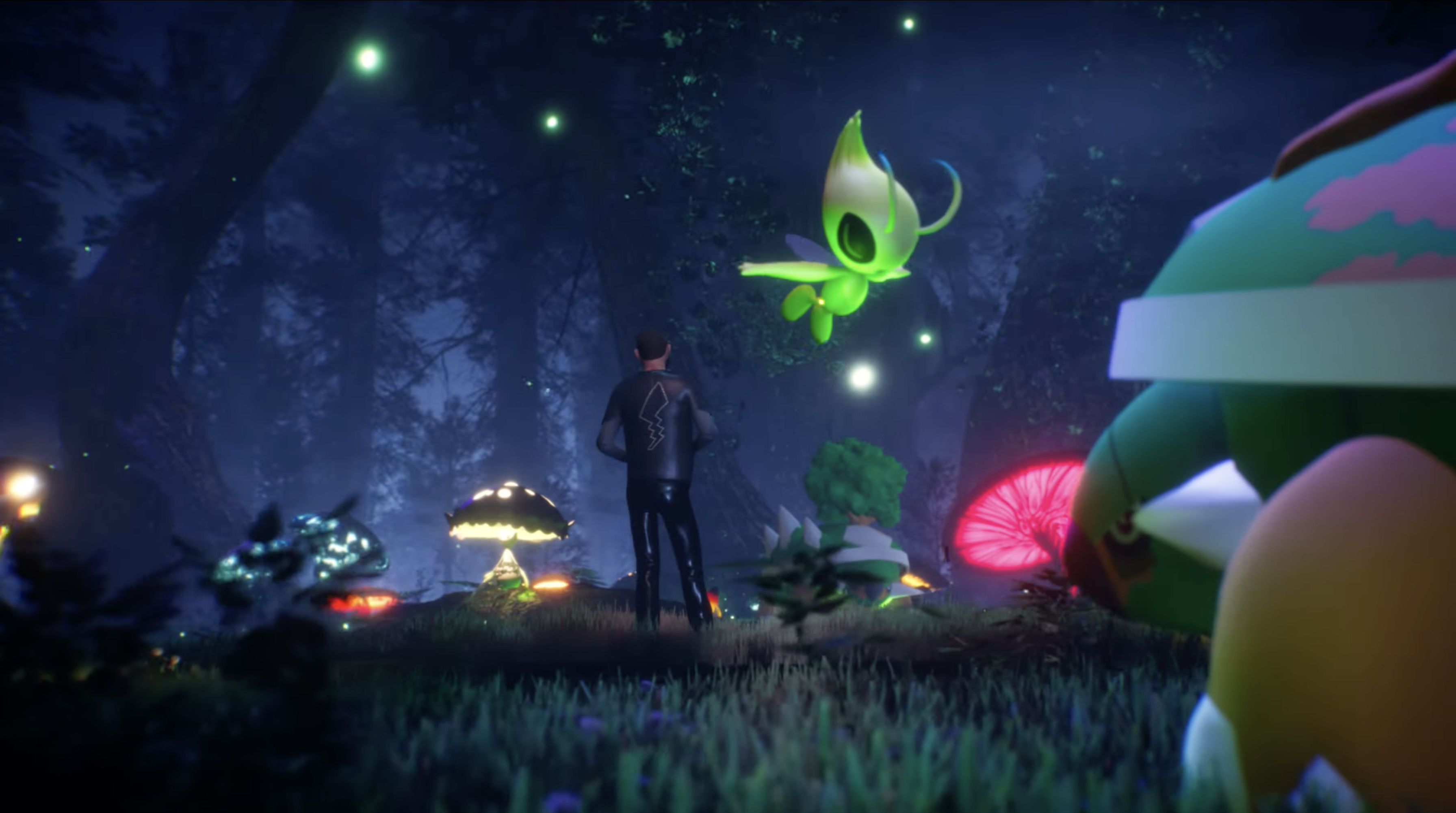 I went on a trip to Ashridge forest earlier today and took a ton of photos. I was very lucky with the light, so I think these are the best photos I’ve taken!

And a few of my favourites: A few more shots from my afternoon walk. 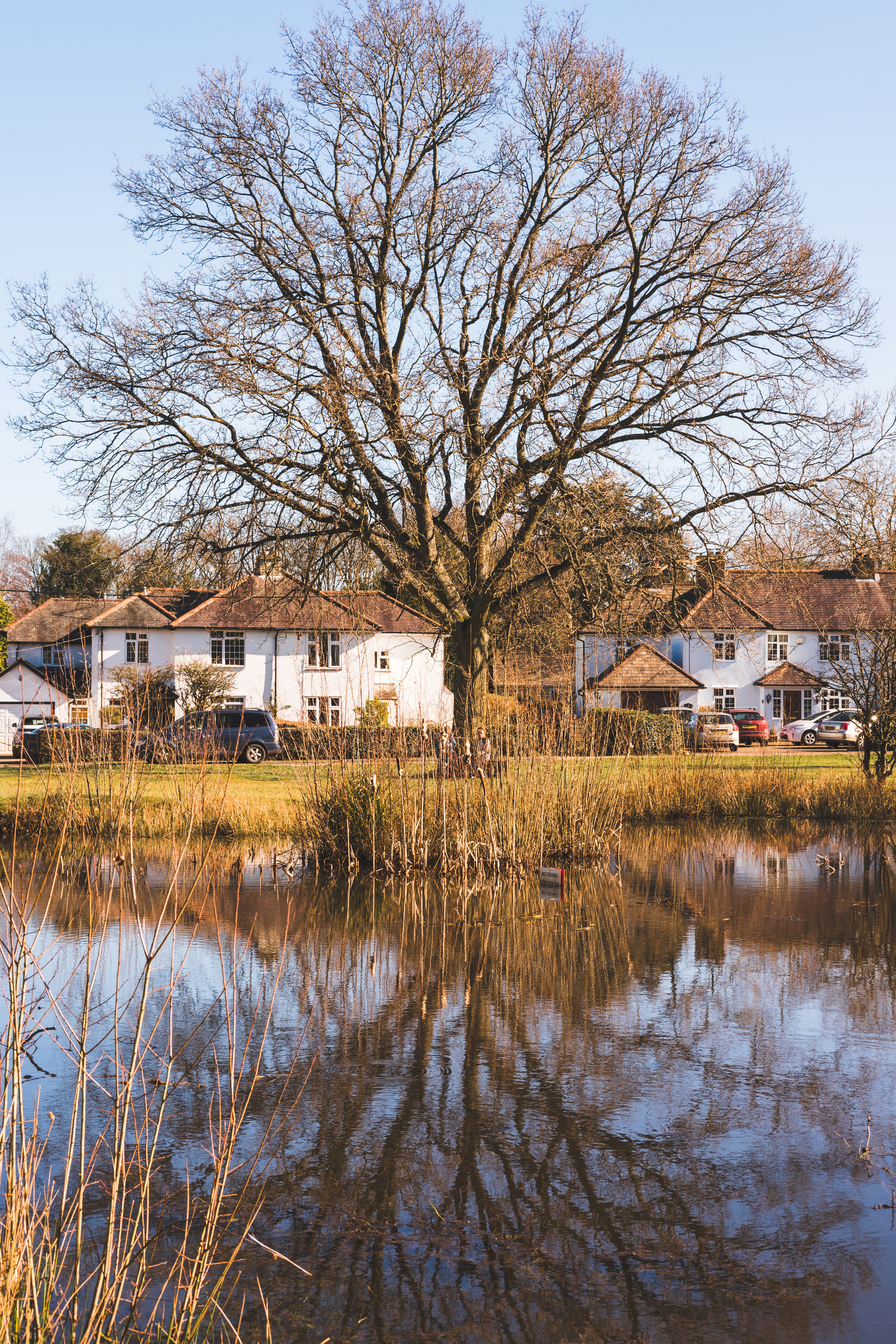 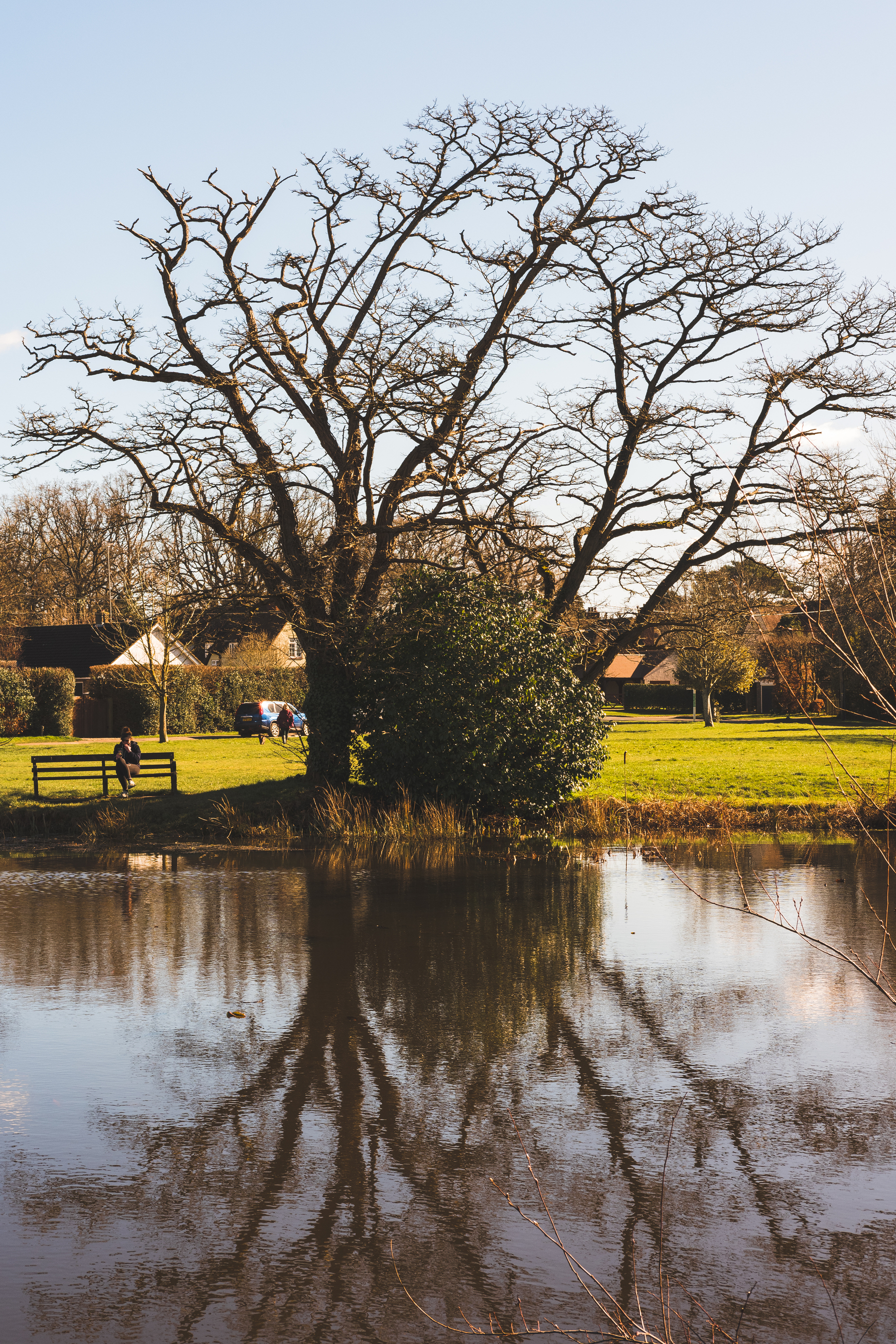 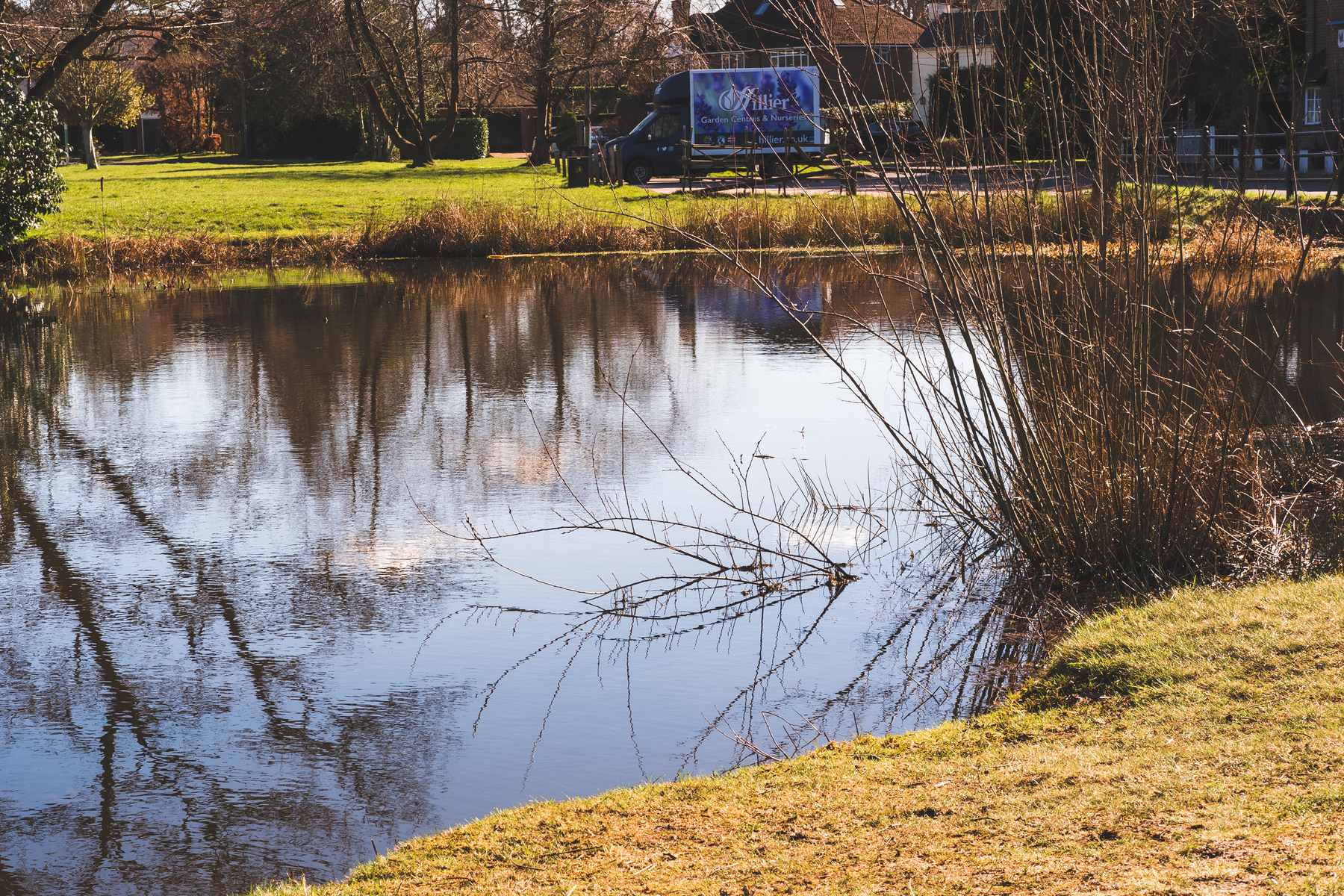 Nice day for a short walk! Much better than being stuck inside and sat in front of a laptop. As much as I use the command line, I’m still a lazy person. And therefore, even if I have to write a short command, I’ll still revert to tapping the up arrow until I find it in my history instead of typing it out manually.

I think I’ve convinced myself today that I’m going to start looking for a remote role at some point in the near future. So I think it’s about time I read a few books and properly bring myself back up to speed with everything.

My only problem with finding a next job is that I’m an iOS developer, and I want to keep it that way. However, at my current job, I’ve been working on more server-side stuff for the past 6/9 months. Although I have been building Text Case at the same time. 🤷

I’m really starting to think that I want to work at a remote company for my next job. Not just working from home, but actually being in a company that is built around being remote. Doist and Automattic are ones that come to mind.

I’ve been in Lightroom again. So here are three over-processed photos that I took last year in Lanzarote. 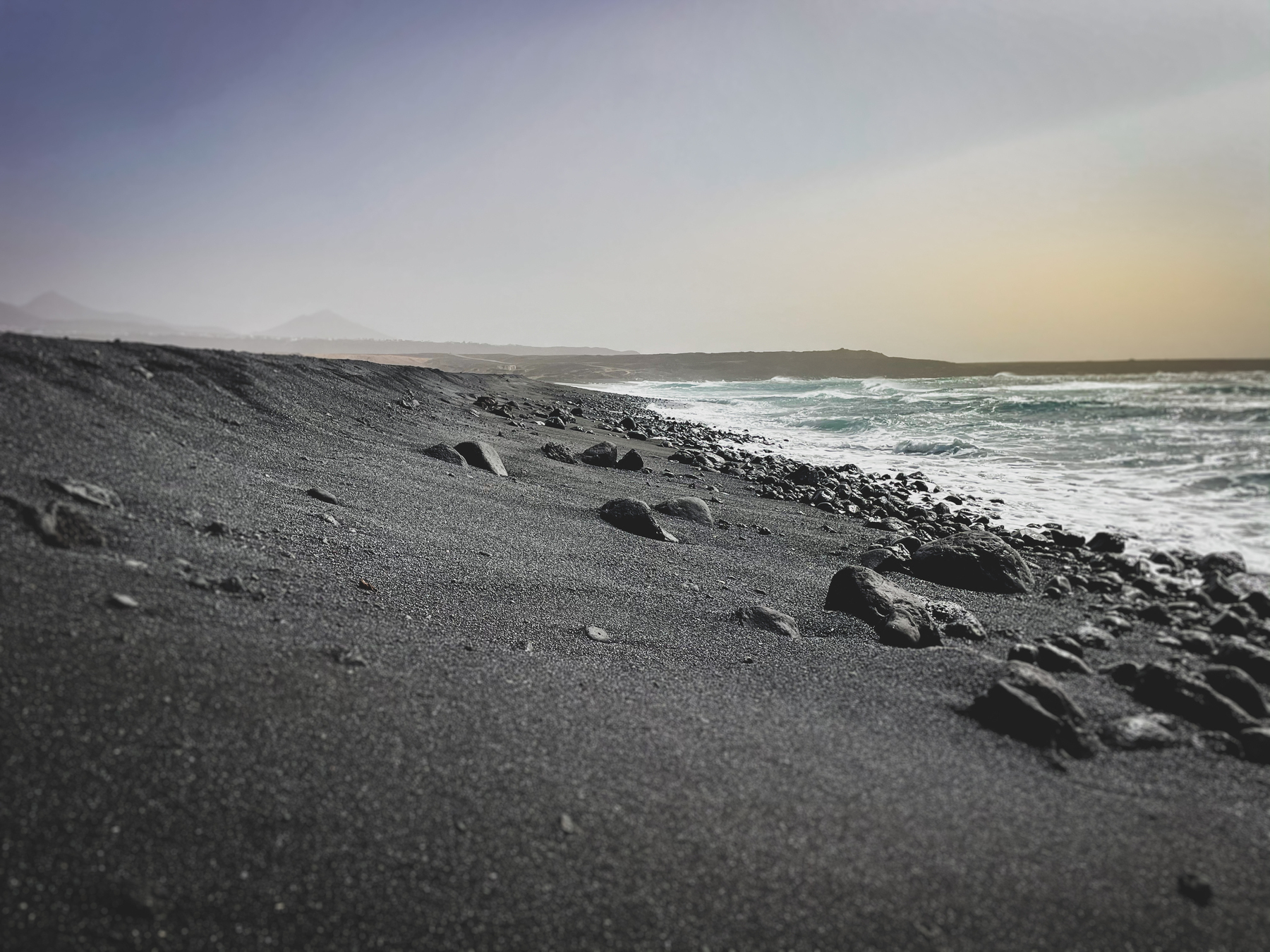 I was thinking about social networks in the context of local communitites earlier. It made me wonder if a type of “scope” could be added to a network like Twitter, where you could determine how localised you wanted it to be.

You could have a scope of the entire world, a country, city, or even a much smaller community. And I think it could be good if you could set a scope when composing a tweet, viewing tweets, or also globally per account.

For example, if you select a scope when composing a tweet, then that tweet will only appear in the timelines of people that fall into that scope. Anyone would be able to go to your profile and read it directly, but you could set who gets it in their timelines?

If you’re reading content, you might want a way to only view content for a specific scope. Not just get a list of trending topics from an area, but actually read a live stream of tweets limited to a particular scope.

I don’t know how many people would even use such a feature, I’m not even sure how much I’d use it. But I do think that one problem the world has with social media is that it makes everyone part of one worldwide discussion. Now that may be a good thing, but I don’t think all discussions need to be held at that scale.

Sure, humans are sociable creatures, but I don’t think we’ve managed the step between having small communities and then suddenly being connected at a global scale very well. And I’m not sure we ever will.

I can’t quite say if this is a temporary phase I’m going through right now, since I’ve done something similar before. But recently I’ve been slowly reducing the ways in which my devices can interrupt and distact me.

I experimented with email services to help distinguish important emails, forwarded them all to the one address, and created some basic filtering/sorting rules. On top of that, I’ve turned off notifications for email and decidew to check it only a couple times a day, if that.

With social media, I haven’t switched off notifications completely, but I do have some filters on those. They seem to be working well, although I can see myself tuning that a bit in the future.

As for other notifications on my devices, I have a system where if I receive a notification that annoys me, I turn them off for that app entirely. Similarly to what I did when experimenting with my email system, by reducing the number of annoying and distracting notifications, they become much more useful, and have a bigger signal to noise ratio.

I’ve also been leaving do not disturb on for long periods of time, and purposely leaving my phone somewhere so I’m not distracted. I must admit, I’ve found it to be rather refreshing.

Maybe this is just a temporary phase I’m going through right now, but when I think about it, I do think there is a value in treating your phone (and other devices) more as tools, and not a life support device designed to be attached to you at all times.

I’ve been making some improvements to my blog theme again. This time focussing on the post template, adding a better design for tags, an author bio, and also a note about my newsletter. 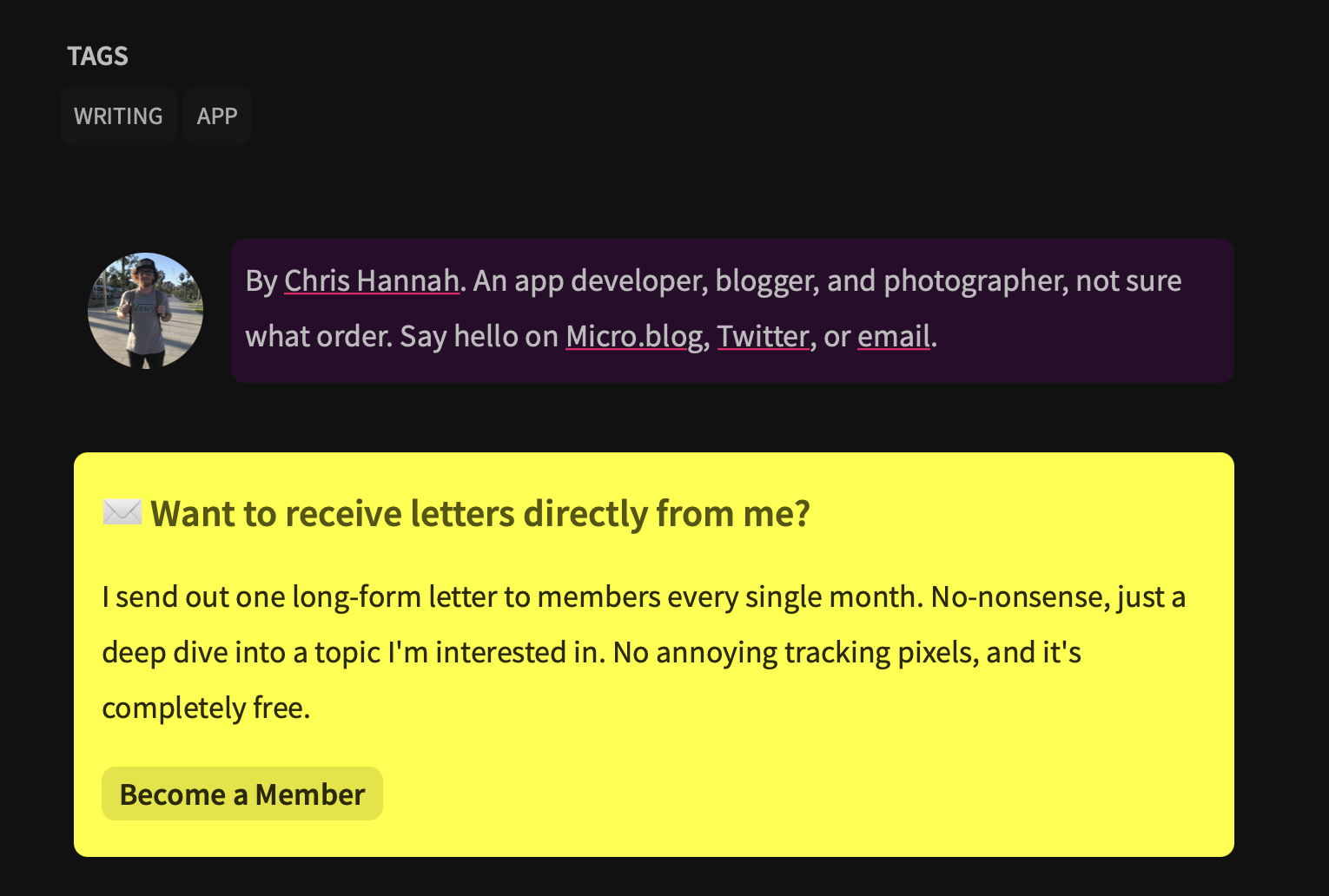 I think I’ve finally found the reading system for me, and it’s all based on the GoodLinks app. The reading experience is GoodLinks is great, distraction-free, but with a few organisational options too.

My system is that I have two “inboxes” for things that I read, my email inbox, and also my RSS subscriptons. If I get a newsletter that I want to read later, i’ll add it to GoodLinks so I make sure that it’s read, but also doesn’t add any clutter to my email folders. The same applies for my RSS subscriptions, I treat my RSS reader as a triage system, similar to emails, where I may read small posts straight away, delete the ones I’m not interested in, and move the rest to GoodLinks.

It’s not just those links that go into GoodLinks though, as I regularly save articles from Twitter, Micro.blog, and variousother webpages via the Share extensions on iOS and maxOS.

I find that this method of moving everything into one place helps me not only keep track of what I want to read, but to also read more. Since I find having a dedicated place for reading, I can build up a decent collection of interesting content. And whenever I have time to read, I can grab my iPad, open GoodLinks, and I know there’s going to be something there that interests me.

The various steps that Boris announced today seemed a bit too complex, so I thought I’d make a page that shows the relevant dates for each step, a rough list of the rules, and also countdowns.

Hopefully this makes it a bit clearer! 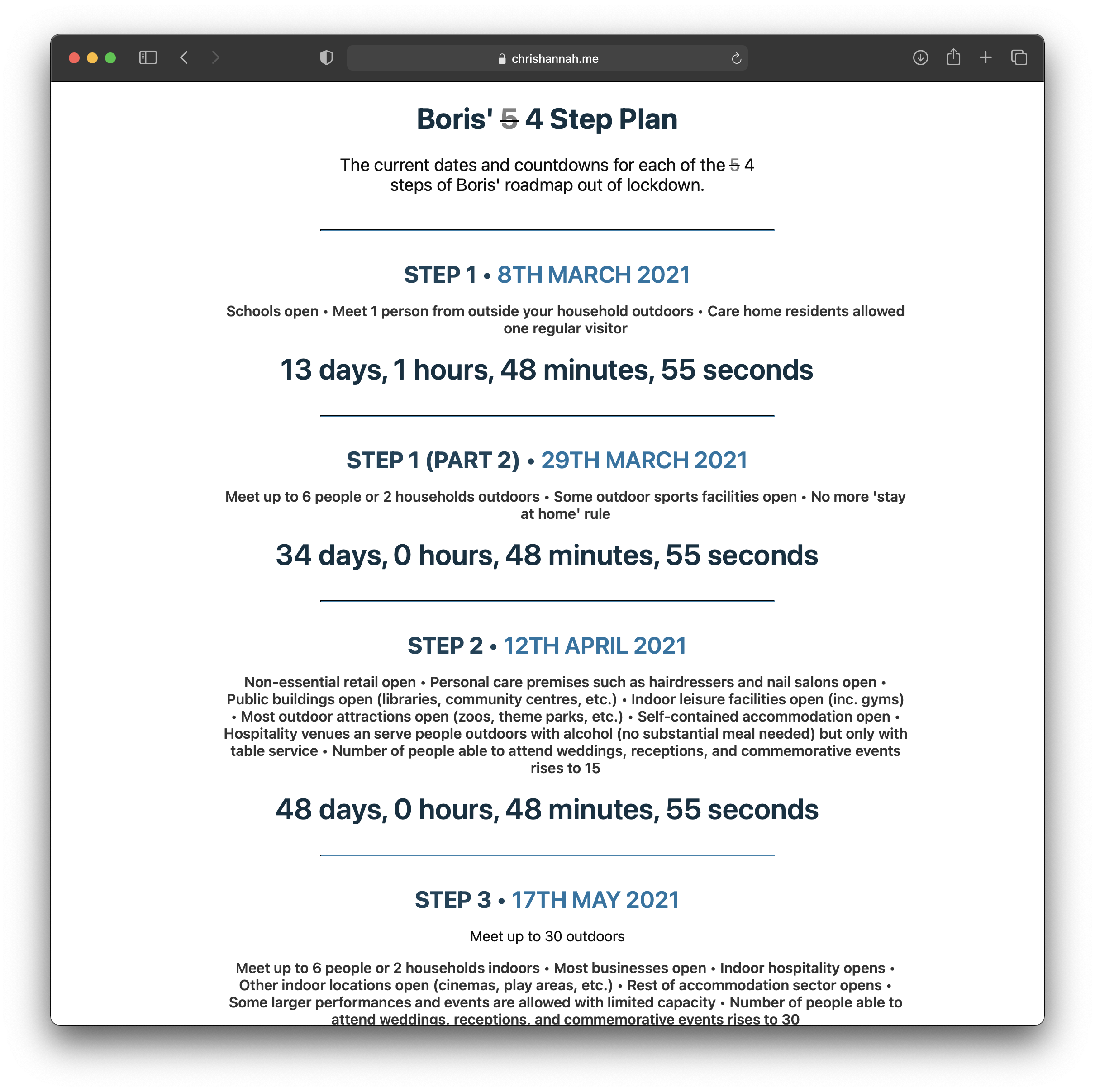